As Lawrence Livermore's National Ignition Facility progresses towards hot-spot ignition, the need to develop more sophisticated microphysics models of high-energy-density matter is increasingly important. The National Ignition Facility enables precise manipulation and characterization of high-energy-density matter at extreme conditions. However, our best simulations are seldom predictive because, in part, of the wide range and extreme conditions experienced in Inertial Confinement Fusion plasmas: from hot, moderately coupled, non-degenerative to strongly coupled and degenerative regimes. Optimizing inertially confined fusion implosions is extremely challenging both for experiments and theory, and will require a new generation of benchmarked microphysics models. We examined energy transport measurements of fundamental properties and processes of high-energy-density plasmas, such as thermal conductivity, electron–ion coupling, and internal electric fields generated at shock fronts. We performed laser-driven shock experiments to determine equation-of-state data for Inertial Confinement Fusion capsule materials. We also investigated phase transitions and metallization in high-pressure deuterium with a dynamic compression experiment. We performed measurements of the radiative properties of a nonlocal thermodynamic-equilibrium gold plasma, and employed a tabular, nonlocal thermodynamic-equilibrium method that was developed for improving accuracy in radiation-hydrodynamic simulations.

The transport and partition of energy in an Inertial Confinement Fusion plasma—such as between kinetic, thermal, and radiation—strongly determine the plasma evolution and final condition of a compressed Inertial Confinement Fusion plasma. There are a number of theoretical transport models available, yet experimental data are very scarce in the high-energy-density regime. We designed experiments to generate benchmark data for high-energy-density plasmas by developing and utilizing new platforms for experiments, as well as developing new theoretical tools for simulating the complex atomic and thermal transport processes in Inertial Confinement Fusion plasmas. Our objectives included measurements of the thermal transport, equation of state, and radiative properties of high-energy-density plasmas utilizing newly developed experimental platforms and models. Our goal was to incorporate shocked equation-of-state data into computational tables used in simulations, and use transport data to test theoretical models. The nonlocal thermodynamic-equilibrium radiative properties of gold were measured and comparisons indicated that improvements in the gold models are required. A tabular nonlocal thermodynamic-equilibrium methodology was developed to be implemented into simulation codes. Our experimental and theoretical effort utilized a number of large-scale laser facilities such as Livermore's National Ignition Facility; the OMEGA laser at the University of Rochester in New York; the Linac Coherent Light Source in Menlo Park, California; and the Gekko laser facility in Osaka, Japan. Our intent was to improve microphysics models and analyze data using simulation tools for benchmarking data sets and improving our simulation capabilities.

To determine the transport and partition of energy in an Inertial Confinement Fusion plasma, we developed experimental platforms to obtain high-quality benchmark data in the important areas of thermal conductivity, electron–ion coupling, and electric field generation at strong shock interfaces.

We designed a differential heating platform for measuring the thermal conductivity between two differentially heated interfaces. The design of the experiment was published by Ping (2015),1 and shown in Figure 1 (left). Experiments were performed for a carbyne beryllium compound on OMEGA, aluminum and carbon using the Titan laser, and iron and germanium at the Linac Coherent Light Source. The results from the Titan experiments on warm dense aluminum, shown in Figure 1 (right), has been summarized in a paper submitted to Nature Communications by McKelvey (2016).2 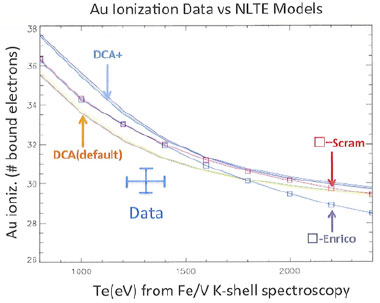 Figure 1. The concept of differential heating (left). A temperature gradient is induced by either (a) surface heating of one material or (b) volumetric heating of two materials. The subsequent heat flow is detected by time-resolved diagnostics. Comparison of measured aluminum thermal conductivity with five models (right).

The electron–ion coupling rate determines the timescale for electron–ion thermal equilibration. This is a fundamental process that controls the rate of heat exchange between electrons and ions, and is important in Inertial Confinement Fusion calculations. Experiments performed at the Advanced Light Source facility at Lawrence Berkeley National Laboratory, investigated the electron thermal relaxation time after ultrafast heating. It was found that for noble metals such as copper, the electron–ion coupling rate increases as tellurium rises, while for transition metals such as iron, the coupling rate decreases at higher tellurium. The opposite trends are consistent with the different density-of-state distributions near the Fermi surface. The copper results are published by Cho (2016).3 Both iron data and a model we have developed to explain the iron results are shown in Figure 2. 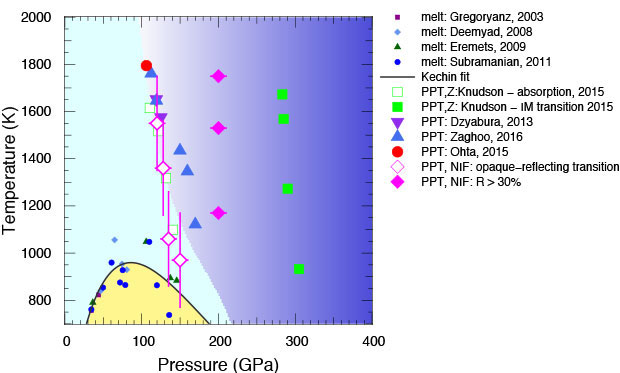 The electric field strength and distribution that develop at a shock front are dependent on the collisional and conduction properties of the plasma at the interface. To probe the electric field at the shock front in a low-density gas, we utilized broadband proton radiography at the OMEGA EP facility (Figure 3), as described in a recent paper by Sio.4 Two additional OMEGA EP campaigns provided data that are being analyzed. It is found that the electric potential at a shock front reaches a few kilovolts, as shown in Figure 3(b), which is many times higher than published model results and is under investigation.

We have also developed a technique using the coherent x-rays at the Linac Coherent Light Source for measuring high­-resolution, phase-contrast images of the shock front. This will provide additional information on the shock-front conditions, as described by Schropp5 and Beckwith.6 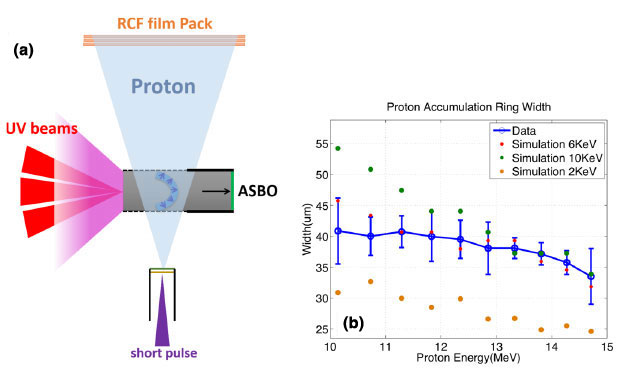 Our main goal of the equation-of-state activity was to provide benchmark equation-of-state data for increasingly sophisticated microphysics models. Over the three-year period of this project, experiments were performed at the OMEGA and National Ignition Facility laser facilities to better understand alternative ablators and the deuterium fuel. Boron carbide, a proposed alternative Inertial Confinement Fusion ablator was studied at the OMEGA laser facility. The shock Hugoniot was measured to 800 GPa—pressures that were four times greater than previous experiments. We developed a new equation-of-state model to fit this data (LEOS 2122), and density functional theory simulations were performed. These experimental results were recently published by Fratanduono (2016).7

Lastly, a discovery science campaign to explore the metallization of deuterium was conducted at the National Ignition Facility. The transformation of hydrogen from a molecular insulator to a metal at high densities is a longstanding focus of high-pressure research. At these conditions, the location of the transition is relevant to understanding the internal structure of gas giant planets such as Jupiter and Saturn. Recent theoretical predictions and now several experiments present conflicting indications of the location of the transition on the temperature–pressure plane at temperatures less than 2,000 K, in the pressure range of 100 to 300 GPa. We have carried out a series of four dynamic compression experiments aimed at probing the insulator–metal transition up to 600 GPa and from 1,000 to 2,000 K at the National Ignition Facility. Figure 4 shows the results obtained from optical probing of a dynamically compressed layer of liquid deuterium at temperatures less than 2,000 K. There currently appears to be no consensus between multiple experimental measurements of the plasma phase transition in deuterium, and the need for further experimental work is clearly indicated. 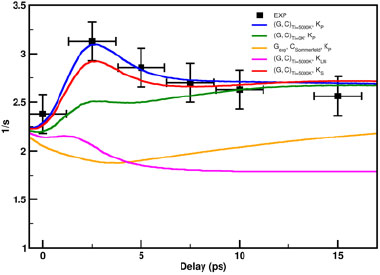 Figure 4. Phase diagram of deuterium. Previous plasma phase transition (PPT) measurements are shown as the large symbols. The diamond symbols indicate work we performed with this project. Disagreements between multiple platform measurements indicate that significantly more work is needed to understand the PPT of deuterium.

Determining the Radiative Properties of a Nonlocal Thermodynamic-Equilibrium Gold Plasma

Accurate opacity models are required for predictive modeling of Inertial Confinement Fusion implosions, because photons play a major mode in energy transfer at many stages of the implosion. Absorption and emission of radiation is important in the hohlraum, the ablator, and the implosion core, for both local thermodynamic-equilibrium and nonlocal thermodynamic-equilibrium conditions. A key step for improving opacity models is collecting accurate opacity and emissivity benchmark data for ablator and hohlraum target capsule materials. In this work, we developed a platform that was designed to produce a highly ionized, relatively uniform gold plasma, which was well characterized by independent temperature and density diagnostics. Spectroscopic measurements from dopant materials such as iron and vanadium determined the temperature. Other diagnostics measured the density by observing the time-dependent expansion of the sample. Thomson scattering also provided an independent temperature measurement for some of the shots.

We performed three experimental campaigns at the OMEGA laser facility. Experiments developed the buried-layer platform and generated benchmark data on the temperature, density, and charge-state distributions as presented by Foord (2015).11 Shown in Figure 5 is an example of the ionization state obtained for one set of conditions, indicating the approximate ionization state obtained at the measured density and temperature. The degree of ionization was determined by analysis of the gold spectrum during the time near the peak emission of the sample. Other data sets are still being analyzed and should lead to a distribution of data over a wider phase space. Predictions from nonlocal thermodynamic-equilibrium models depend on many approximations, and in these extreme conditions are known to disagree. Thus, such data allows direct comparisons with predictions from high-atomic-number, complex nonlocal thermodynamic-equilibrium models, and provides benchmark data for improving these models. 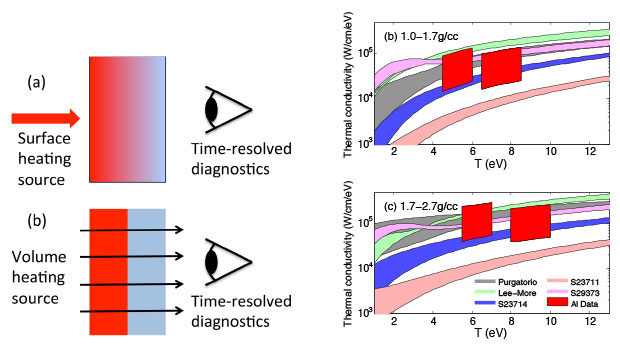 From these results and developments of new experimental and theoretical platforms, we have enhanced our capabilities for predictive manipulation of high-energy-density matter for stockpile stewardship. This work has a specific focus of optimizing a burning plasma at the National Ignition Facility and other high-energy lasers, applicable to high-energy-density science. Our research is also strongly aligned with inertial fusion science and technology, a Laboratory strategic focus area.

Developing a predictive capability for optimizing Inertial Confinement Fusion implosions at the National Ignition Facility will require a new generation of benchmarked microphysics models. We performed measurements of fundamental properties and processes in high-energy-density plasma, such as thermal conductivity, electron–ion coupling, and material equation of state, and progress in understanding the radiative properties of a nonlocal thermodynamic equilibrium gold plasma. This project developed new theoretical and experimental platforms that will allow further research in each of these areas through continued collaborations with national and international scientists and students, and will provide critical data for the Inertial Confinement Fusion and the stockpile stewardship programs.