Studying one of the smallest known particles—the neutrino—can answer several of the biggest questions in physics. Despite the huge advances made in understanding these weakly interacting particles, key questions remain. For example, the mass ordering or the value of neutrino masses remains unknown, as well as whether the neutrino is its own antiparticle. Initial testing is underway for the three-neutrino-flavor paradigm in neutrino oscillation measurements and cosmological data analysis. Next Enriched Xenon Observatory (nEXO) and Precision Reactor Oscillation and Spectrum (PROSPECT) experiments are being considered to address these questions through the advancement of state-of-the-art technology. The nEXO experiment is a proposed 5-ton enriched xenon time-projection chamber that searches for the exceptionally rare and difficult-to-measure neutrinoless double-beta decay. The PROSPECT experiment probes neutrino oscillations at the shortest-ever length scale to address the many experimental anomalies that suggest the existence of a fourth-neutrino flavor. In this project, we advanced techniques to improve background rejection, which is of critical importance to both experiments since the signals of interest are rare. Second, we developed methods to understand the response of the PROSPECT detector to neutrino interactions, and broadened the energy range over which the instrument response is well understood. Third, we established the sensitivity of a large-scale neutrinoless double-beta decay experiment—focusing on the time-projection chamber approach central to nEXO.

This project focused on two leading experiments in neutrino physics: PROSPECT and nEXO—each measuring different aspects of the neutrino.

The work on PROSPECT played a key role in developing the proposal for the experiment and its selection by the DOE Office of Science (DOE-SC) to move forward with construction. In particular, the developed simulation package helped to study the optical and position response of the detector that was used to design and confirm energy response of the detector. Also, the team studied detector response to cosmogenic background, and how it can be rejected. Improving background rejection extends physics reach. Lastly, we focused on extending reach of the selected hardware. An example is photomultiplier tube (PMT) characterization beyond linear operating range—effectively extending dynamic range. This will be used for calibration using through-going muons.

The measurement of the quantum nature of the neutrino is the second recommendation of the Nuclear Science Advisory Committee (NSAC) long-range plan, and the highest new priority of the U.S. nuclear physics community (Geesaman et al. 2015). The nEXO detector is designed to make this measurement. This project focused on the simulation of detector physics attainable, as well as development of a conceptual design for high voltage stability in liquid xenon.

Broadly, the work on the PROSPECT experiment under this project focused on understanding and optimizing the response of the PROSPECT antineutrino detector to signal and backgrounds. Over the course of the research, PROSPECT evolved from simple conceptual designs, to final design parameter selection, through to construction and characterization of actual detector elements. We had impact on each of these stages—improving the performance of system beyond the baseline defined by efforts supported by the project itself. In all cases, our goal was to identify areas where studies or simulation tools could inform design choices that resulted in improved physics reach.

At the outset in FY15, we enhanced the capabilities of the PROSPECT simulation package (based on Geant4) to include full optical propagation, and used this to test assumptions made up to that point in the reflector geometry design process (Figure 1). A detailed study of positron energy response was performed, validating our underlying two-dimensional optical readout scheme and lightweight detector structure concept. The demonstration that the inherent energy resolution degradation is minor was an important result, since it dispelled criticisms by competing projects advancing more complex and expensive approaches. 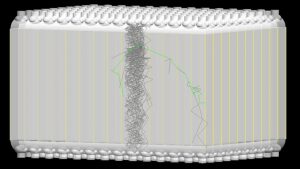 Figure 1. Three-dimensional rendering of the baseline design for the Precision Reactor Oscillation and Spectrum (PROSPECT) experiment that was used in our simulation efforts. Shown are 144 liquid scintillator segments readout by photomultiplier tubes at either end.

PROSPECT was selected from among that stiff competition by DOE-SC to proceed in FY16. We used the simulation package developed earlier for two purposes. First we examined a wide range of possible PMT and wall thickness combinations, and determined which was optimal for the physics goals of PROSPECT. These results were validated against prototype data. Secondly, we studied the cosmogenic background response of the baseline design, developing optimized analysis strategies to enhance the signal-to-background ratio for antineutrino events (and therefore sensitivity to neutrino oscillation).

In the final year of the project, we focused on topics that could improve the performance of the PROSPECT detector. In particular, PMTs had been selected and purchased. We implemented an automated test stand to fully characterize these devices (Figure 2). By measuring the individual gain and saturation curve of every PMT, it will be possible to (1) rapidly commission the device and speed physics data gathering and (2) access through-going muon events that fall outside the linearity range defined by the reactor antineutrino energy scale. These will allow a cross-check of segment volume calibration measurements, which in turn is needed for the neutrino oscillation physics measurement to be conducted by PROSPECT. 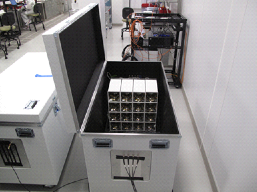 Figure 2. Photomultiplier (PMTs) tube testing and characterization stand for the PROSPECT experiment. By automating a variable illumination and acquisition system, the project team made it possible to efficiently characterize all 300+ PMTs over a broad light range, including into saturation. This will effectively increase the dynamic range of the PROSPECT antineutrino detector to include muon transits useful for volume calibration.

The research work on nEXO falls into a few broad areas: simulation and sensitivity analysis, detector concept, and related topics.

The detector concept (Figure 3) had to be developed to assess the readiness of the technology for the larger scale project as well as develop a model that can be simulated to determine the physics reach of the experiment. Much of this has been completed with the previous experiment EXO-200 and also through collaborative work by the nEXO collaboration. In this project, the team coordinated the efforts of the collaboration to assemble a detector concept that includes all of the major pieces, with the masses and radioactivities. In addition to leading this effort, we also worked on a number of key elements such as the large carbon fiber cryostats, the copper time projection chamber (TPC) vessel, the HFE7000 shielding thickness, and the water tank shield. The collection of all of these elements now forms the basis from which the nEXO collaboration can define the physics reach of the experiment. 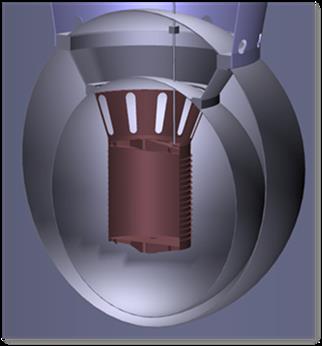 Figure 3. Rendering of the baseline design for nEXO that was used in the LDRD simulation efforts. One of the key results concerned the size optimization of the hydrofluorether (HFE) volume which surrounds the active liquid xenon volume and acts as a thermal bath as well as a radioactive shield.

In addition to the detector concept, there are elements that pose an increased risk to the construction project. We designed a system that can address one of the highest risks, high voltage. Previous experiments have experienced difficulty with high-voltage breakdown in liquid xenon. The reasons are not completely understood, so we designed a system that can make measurements to elucidate the problem. We designed three stainless steel vessels with an operating volume large enough to hold a full diameter section of the nEXO high-voltage system to test the stability at the expected operating voltages.

The high-voltage testing helps prevent a high-voltage discharge, but the damage from a full discharge is so large that we also investigated mitigation methods. We speculated that controlling the resistivity of the high-voltage structures, we could control the discharge currents and limit damage. We carried out two calculations to test this idea. The first is to calculate the current for a given resistivity. This was done with custom C++ software implementing a finite element-like algorithm. This calculation showed that the current could be controlled. The second calculation was for the distortion to the electric field in the detector that would be caused by this resistivity. This calculation showed that there is a range of resistivity that provides sufficient current limiting while maintaining field uniformity. The collaboration is now investigating materials that could achieve this resistivity within the radiopurity requirements.

The bulk of this research effort on nEXO was on the simulation of the physics of the detector. The work described in the first physics paper, for the nEXO collaboration, was led by Livermore to calculate the sensitivity of the detector concept to the neutrinoless double-beta decay (Figure 4). This paper has been submitted (Albert et al. 2017). In this paper, we show that the detector can reach the sensitivity goal of just under 1028 years. This work required pulling together many efforts from the collaboration as well Livermore-led activities including: studying the Feldman-Cousins formalism and how it affects sensitivity results; detailed simulation of the light propagation in the detector and the corrections of non-uniformity; studying the effects of position resolution on multisite differentiation; and working with students at Livermore to simulate the HFE7000 shielding and backgrounds from various internal components. 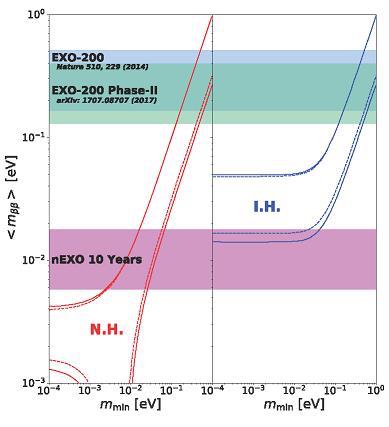 Figure 4. Sensitivity of the nEXO experiment to the neutrino mass calculated for a 10-year exposure.

Finally, we investigated a number of related topics. The first is that we calculated the dark matter detection sensitivity since it is a large xenon mass similar to other dark matter detectors. nEXO is not designed for dark matter detection, but it might be interesting to see if it can make a physics impact. It turns out that the limits that nEXO can set for dark matter are not competitive because nEXO does not have the required low energy threshold. We worked with the creator of a code called NEST (Noble Element Simulation Technique) that simulates energy deposition in liquid noble gases to improve it for the neutrinoless double-beta decay simulation. This improvement resulted in NEST 2 that has a substantial improvement in liquid noble gas scintillation simulation that is applicable to other projects. It was also integrated into the nEXO Monte Carlo (Figure 5) with a focus on speeding up the code execution. 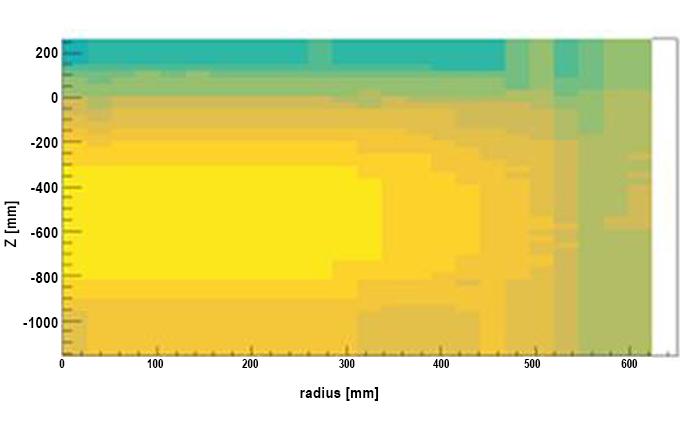 Figure 5. Simulation of the light map for the nEXO detector. This simulation is important for understanding the energy resolution of the detector.

Probing neutrinoless double beta decay and neutrino oscillations at short length scales directly addresses Laboratory core competencies in nuclear, chemical, and isotopic science and technology, as well as radiation detection systems. The work carried out in this project has played a central role in the full realization of the nEXO and PROSPECT projects. The Laboratory is now leading world-class, high-profile, and high-priority scientific discovery experiments.

This research project has been very successful in establishing Livermore as a leader in this field. We have received funds from DOE-SC to continue working on these projects. Construction of the PROSPECT detector will be completed soon, and we expect a physics result within the fiscal year. The nEXO sensitivity is now established and published. Livermore is leading the research and development effort to reduce risk of the nEXO project that will continue until the project starts.