We are acquiring and analyzing proton measurements of self-generated magnetic fields (B-fields) in high-energy laser targets (hohlraums) to determine the major influences on their directionality, noting in particular the role of magnetohydrodynamics. This basic science project has the potential to transform hohlraum modeling, a key component in nuclear weapons science and other national security missions.

Our goal is to design and execute experiments that use proton deflection to measure the long time-scale topology of self-generated magnetic fields in various hohlraum target types on the National Ignition Facility (NIF). We will test the hypothesis that self-generated B-field dynamics (the directionality of a magnetic field) in a hohlraum at long time-scales (≥ 10 nanoseconds) is dominated by Nernst flow (an electrochemical phenomenon) rather than advection (a physical phenomenon), which causes the B-fields to concentrate near the hohlraum walls. Simple estimates show that the advection and Nernst velocities in a hohlraum plasma are comparable, so at late times it is unknown which will dominate. Proton measurements have the potential to show the topology (amplitude and geometry) of the hohlraum fields at long time-scale and thus demonstrate the significance of magnetohydrodynamics (MHD) effects in the hohlraum.

The measurements we are conducting will, if successful, provide evidence for the topology of path-integrated B-fields in a hohlraum-like geometry and have the potential to transform hohlraum modeling, which is important for all programs that use a hohlraum x-ray drive. This data will provide compelling evidence for evaluating the importance of including MHD physics in the hohlraum models. We anticipate that this work will inspire follow-up measurements designed to study the B-field topology in more detail and may transform hohlraum modeling (predictive capability) by showing the importance of MHD effects.

This research supports the DOE goal of delivering the scientific discoveries and major scientific tools that transform our understanding of nature and strengthen the connection between advances in fundamental science and technology innovation. This research enhances the Laboratory's core competency in high-energy-density science and contributes to addressing the research challenge in nuclear weapons science. Specifically, the results will inform efforts to achieve ignition in an Inertial Confinement Fusion experiment and to understand the physics of high-energy-density plasmas for all programs that use a hohlraum x-ray drive.

We achieved both experimental and modeling results since starting the project in March. We (1) developed a two-ring experimental design (gold and aluminum rings); (2) developed a new laser drive geometry that uses sixteen NIF beams on each ring to create a fairly uniform drive intensity and whose primary experimental measurement is proton deflectometry using the 3 and 14.7 MeV protons from a deuterium–helium-3 (D3He) exploding pusher; (3) used Hydra simulations to set the timing of the proton flash; (4) conducted a shot, the proton data from which is currently being etched and scanned, though preliminary estimates of the B-field from the gold, based on proton deflection, are close to the simulation value. 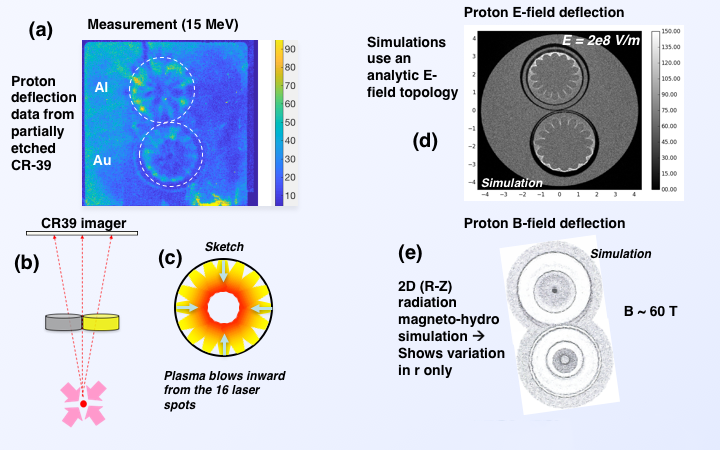 Results, setup, and simulation for shot experiments at the National Ignition Facility (NIF) to measure the asymptotic behavior of self-generated magnetic fields in a NIF hohlraum geometry. (a) A deuterium–helium-3 (D3He) exploding pusher generates 3.1 and 15 MeV protons, which pass through gold (Au) and aluminum (Al) rings, become deflected by electric and magnetic fields, and strike a CR-39 plate detector. The image on the CR-39 shows proton deflection in a series of "spoke" patterns. The Al ring shows the spokes further advanced toward the center of the ring than the Au ring. (b) The target geometry used for the two NIF shots. Two rings, one aluminum and one gold are illuminated on the inner surface with 16 beams of NIF. (c) The plasma blows out as shown in the sketch. (d) The effect of an estimated electric field with 16-fold symmetry. (e) Two-dimensional Hydra simulations with magnetohydrodynamics terms active generate proton deflection in various rings. More advanced three-dimensional modeling efforts are underway to better understand the observed proton deflection pattern.