In 1939, Niels Bohr and John Wheeler formulated a theory of neutron-induced nuclear fission based on the hypothesis of the compound nucleus (Bohr and Wheeler 1939). The “Bohr hypothesis” is at the heart of every current theoretical fission model; it states that the decay of a compound nucleus for a given excitation energy, spin, and parity is independent of its formation (Bohr 1936). The formation of the compound nucleus is long enough (approximately 10 -16 seconds, which is 107 times longer than the time a nucleon needs to traverse the nucleus) for the nucleus to “forget” the details of its origin. Although this hypothesis is widely accepted by theorists and experimentalists, its implications (especially concerning fission product yields) have never been experimentally verified precisely via direct comparison of fission observables. Currently, the Bohr hypothesis is verified to about 20 percent accuracy in nuclear reactions such as (t,pf), ( 3 He,df), and ( 3 He,tf) (Britt et al. 1968, Cramer and Britt 1970, Britt and Cramer 1970, Younes and Britt 2003a, 2003b). We performed direct experimental validation of the practical consequences of the Bohr hypothesis during induced nuclear fission. We compared the fission product yields of the same 240 Pu compound nucleus produced by two different reactions: (i) n+ 239 Pu and (ii) gamma+ 240 Pu. The two Pu isotopes provided a valuable set of nuclides for use in investigating the influence of the spin and parity of the compound nucleus on the detailed fission product yields distribution, including shell and pairing effects and fission dynamics. The only difference between these two reactions was a small mismatch in the spin and parity distributions of the 240 Pu compound nucleus. High-precision measurements of the 240 Pu fission product yields using monoenergetic photons produced at the High Intensity Gamma-Ray Source facility were performed using a gamma-ray beam energy of 11.2 MeV, creating the same compound nucleus and excitation energy as neutron-induced fission of 239 Pu at an incident neutron energy of 4.5 MeV.

Nuclear fission, the most pronounced collective nuclear-structure phenomenon, relates the fission product yields (FPYs) and their kinetic energies to the potential energy of the fission system (Vandenbosch and Huizenga 1973). The evolution of the fission system (from the initial particle impact through intermediate saddle points to scission and finally to the configuration of separated fission fragments) is governed by multi-dimensional potential-energy surfaces and the shell structure of the fragments. At low excitation energies, shell and pairing effects in nuclei influence both the mass and energy distribution of the fission fragments; therefore, nuclear structure details are required to describe experimental fission data. Models based on different phenomenological and microscopic approaches are used to describe the complexity of the fission process and are assessed by how well they describe the various experimental observables (Wagemans 1991). One of these observables is the dependence of the FPYs on excitation energy. The magnitude and the slope of the energy dependencies of the FPYs have significant impacts on basic and applied physics. For example, r-process nucleosynthesis cannot be fully understood without a precise knowledge of the fission properties of very neutron-rich isotopes of the heaviest elements, which are presently not accessible to direct measurements (Iliadis 2015). Precise knowledge of FPYs is critical to nuclear reactor operation, nondestructive nuclear fuel investigation, accelerator-driven systems, and decay heat (Chadwick et al. 2010, Laurec et al. 2010, MacInnes et al. 2011, Nethaway et al. 1977). In addition, information about the FPYs has a fundamental impact on basic fission studies and the antineutrino spectrum (Hayes et al. 2014). The accuracy of purely theoretical predictions is insufficient for quantitative predictions of the energy dependence of FPYs on the precision that present nuclear applications require (Schmidt 2008). However, it is very difficult to make quantitative predictions about the FPYs, especially within a microscopic approach based on time-dependent Hartree-Fock calculations, where the experimental magnitude of the energy dependence is comparable to (or even smaller than) the uncertainties of the theoretically calculated FPYs (Schunck et al. 2015, Randrup and Moller 2013).

We performed the first-ever experiment to identify the practical consequences of the Bohr hypothesis in the context of induced nuclear fission. We measured the FPYs from the 240 Pu (gamma,f) reaction at the High Intensity Gamma-Ray Source (HIGS) facility at Triangle Universities Nuclear Laboratory (TUNL) (Weller et al. 2009) and compared the results to the FPYs obtained from the 239 Pu(n,f) reactions that our group recently measured at the TUNL Tandem Van de Graaff accelerator (Bhatia et al. 2014 and 2015, Gooden et al. 2016, Tonchev et al. 2017). Both reactions (see figure) produced a 240 Pu compound nucleus with the same excitation energy since the incident energies of the neutron and photon beams were carefully chosen to account for the 6.5 MeV difference in binding energy between 239 Pu and 240 Pu. The only difference was the different spin-parity distributions from n + 239 Pu and J π = 1 - from gamma + 240 Pu, which is widely believed to be inconsequential at high excitation energies. 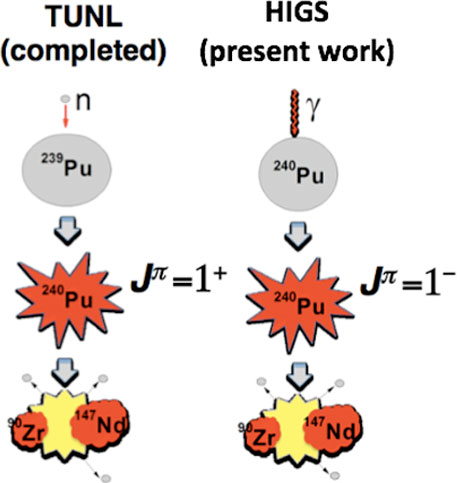 We compared the results of two experiments, one at the Triangle Universities Nuclear Laboratory (TUNL) Tandem Van de Graaff accelerator, the other at the High Intensity Gamma-Ray Source (HIGS) facility. One produced an induced fission reaction ( left ) via a neutron as an incident particle while the other produced a photofission reaction ( right ) leading to the same compound 240 Pu nucleus.

High-precision FPY measurements for 240 Pu(gamma,f) were performed at the HIGS facility, using the successful methodologies established during our studies of neutron-induced fission of 239 Pu at TUNL by our multi-laboratory Lawrence Livermore National Laboratory-Las Alamos National Laboratory-TUNL collaboration (Bhatia et al. 2014 and 2015, Gooden et al. 2016, Tonchev et al. 2017). This is an important observation because neutron-induced fission measurements on radioactive targets, such as 237 U(n,f) 238 U, 232 U(n,f), 238 Pu(n,f), and 231 Th(n,f), could instead be replaced by photofission measurements on stable targets, such as 238 U(gamma,f) 238 U, 233 U(gamma,f), 239 Pu(gamma,f), and 232 Th(gamma,f), respectively. We demonstrated this capability for the first time by comparing the possible relationship between the FPYs data sets from two fission reactions: 239 Pu(n,f) and 240 Pu(gamma,f).

Our research supports NNSA and Laboratory goals in stockpile stewardship. Our research also enhances the Laboratory’s core competencies in nuclear, chemical, and isotopic science and technology. Our study of methods of obtaining precision FPY measurements on several high-impact isotopes extends our fundamental knowledge of nuclear fission by providing accurate benchmark data for theoretical models to assess the predictability of the Laboratory’s simulations from the two most important incident particles inducing fission: neutrons and photons. It will also add the capability to simulate photofission reactions to the Laboratory’s FREYA computer-simulation code.

We successfully performed the first experiment to identify the practical consequences of the Bohr hypothesis in the context of induced nuclear fission. In order to compare FPY data from two different nuclear reactions, it was imperative that both mechanisms were studied under the same experimental conditions. 11.2 MeV photons at the HIGS facility were used to induce fission of 240 Pu, creating a compound nucleus with the same excitation energy as 4.5 MeV neutron-induced fission of 239 Pu. By comparing FPYs from both reactions, we investigated the role of the entrance channel, as well as the spin and parity of the compound nuclear system during the fission process. The combination of these effects was shown to be small, even at excitation energies a few MeV above the fission barrier. Our study demonstrated a new method for determining the FPYs for unstable isotopes using photofission as a prototype reaction. As an example, direct reactions such as 237 U(n,f) 238 U are very difficult to perform, while indirect reactions like 238 U(gamma,f) 238 U are comparatively easy to measure. Our novel approach can be applied to a much larger class of fission reactions.