The application of chronology to the field of nuclear forensics, pioneered at LLNL, has been one of the most exciting developments in recent years. Similarly, recent reports on the current state of chronology from geologic data (geochronology) highlights the growth of high-precision uranium–lead age-dating techniques, and their potential to help answer important questions regarding the evolution of life on Earth, as well as the interconnection between the Earth's geochemical systems and climate variability. We plan to re-measure uranium-234, -235, and -238 nuclear decay rates using first-principles methods. Accurate and precise decay constants are fundamentally important to uranium, uranium–lead, and lead–lead dating techniques applied widely across diverse fields including nuclear forensics and geochronology. These techniques provide an understanding of foundational nuclear and Earth processes. With the development of modern, advanced measurement techniques, however, the precision, accuracy, and utility of such decay data are now limited by knowledge of the decay constants involved. For this effort, we will employ radiochemical separations and characterization, source preparation for low-geometry alpha counting, novel implementation of mass spectrometry, and advanced alpha–gamma coincidence counting.

Determining the alpha-decay rate of any nuclide is theoretically very simple, involving only accurate measurement of the mass or number of atoms in a sample, and the number of alpha particles emitted in a given length of time. However, significant uncertainty may arise from interfering impurity nuclides and daughter products, improper sample preparation, and difficulties in accurately determining counting efficiency. Furthermore, the long half-lives of uranium isotopes make it difficult to obtain adequate counting statistics and increase the sensitivity to radioactive impurities. Accomplishing our goals involves careful radiochemical separations and characterization, meticulous source preparation for low-geometry alpha counting, novel implementation of existing state-of-the-art mass spectrometry, and the use of advanced alpha–gamma coincidence counting techniques. Our set of experiments will result in four specific outcomes: (1) measurement of the decay rate of uranium-234 with significantly lower uncertainty than any previously reported direct measurements, (2) improvement of the accuracy and precision of gamma-ray branching intensities associated with the decay of uranium-234, (3) measurement of the thorium-234 decay rate with improved accuracy and precision, and (4) measurement of the decay rates of uranium-238 and -235 with sufficient precision to confirm the most precise existing measurements and resolve any apparent discordance. Our overarching goal with this research project is to ensure the quality of results, including metrological traceability, in accordance with community guidance from the international Joint Committee for Guides in Metrology to facilitate implementation across diverse disciplines.

Our work will directly impact both basic and applied research where uranium decay constants are utilized, including key focus areas at LLNL as well as in the wider community, particularly in the fields of nuclear, chemical, and isotopic science and technology. Specific mission relevance includes improvement of the accuracy and uncertainties associated with nuclear forensic chronology and nondestructive analysis of uranium samples.

In FY16 we (1) characterized the uranium-234 source by alpha spectrometry and further characterized isotopic composition by mass spectrometry, as well as performed experiments to identify optimum uranium-source preparation parameters and determine deposition yield and self-shielding effects (see figure); (2) achieved sufficient separation of thorium from bulk uranium for the uranium-238 decay-constant measurement; (3) calibrated a depleted uranium standard for uranium-234 isotope-dilution measurements; (4) extracted and deposited sources of thorium-234, which were counted with the charged-particle and gamma-coincidence system; and (5) obtained a silicon detector to measure beta particles in coincidence with photons in the germanium detector, and implemented routines for coincidence definition, background subtraction, and dead-time corrections. 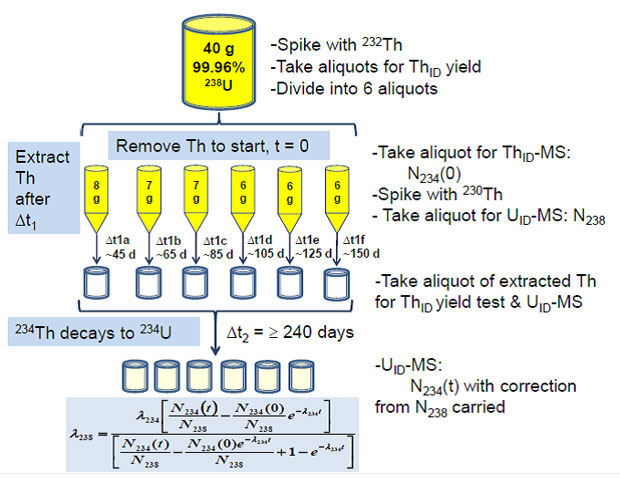 Schematic overview of a thorium-234 in-growth experiment as an independent high-precision measurement of the uranium-238 decay constant. Six aliquots of highly enriched uranium-238 are chemically purified to establish t0 and assayed with high precision before decaying for different time intervals ∆t1. After the ingrowth periods ∆t1, thorium is extracted, a small aliquot removed for yield measurements, and the remainder allowed to decay completely to uranium-234 over the longer time interval ∆t2. The number of uranium-234 atoms measured in each aliquot after ∆t2 is directly related to the number of uranium-238 atoms that decayed during ∆t1.