LDRD on Journal Covers (and TV)

The impact of LDRD research extends beyond the DOE mission space into the wider scientific arena. Evidence of this can be seen in is seen in both the number of scientific journal articles and front-cover features in high-visibility journals documenting LDRD project results. In FY18, LDRD-funded research was even featured on television.

Horizon, BBC's longest running science program, visited LLNL to film segments for "Horizon: Journey into Jupiter," a co-production with the Discovery Science Channel. In October, 2017, they visited the National Ignition Facility to film and interview scientists Marius Millot, Jon Eggert, Dayne Fratanduono, and Peter Celliers about their discovery science experiments on liquid metallic hydrogen—research that was supported in part by LDRD. They also interviewed scientist Thomas Kruijer about his work relating to the age of Jupiter and filmed relevant meteorite samples in his laboratories. The episode aired on January 24, 2019.

On May 22, 2018, Tim Didion, a reporter with ABC7 News, visited the Forensic Science Center to interview LLNL's Katelyn Mason and Deon Anex regarding a new method for individual identification using protein identity markers found in human bones (see "Research Highlights"). The segment aired on the evening news on May 23. The new protein marker technology addresses a 2009 National Research Council report on forensic science that detailed the weaknesses of many current approaches and reported an urgent need for new science-based forensic methods. While DNA-based forensics remains the first choice for human identification, the new protein marker technology provides an alternative when DNA has been destroyed by time or extreme conditions. 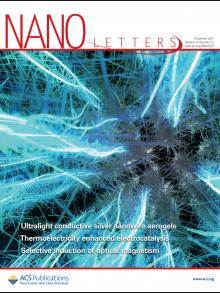 Metal foams (or porous metals) represent a new class of materials with a unique combination of properties including light weight, high surface area, high electrical conductivity, and low thermal conductivity that can advance technologies in electronics, thermal insulation, sensing, catalysis, and energy storage. Livermore researchers have fabricated ultralight silver foams (silver aerogels) with predictable densities down to single-digit mg/cm3. The team prepared high-purity silver nanowires by polyol synthesis, purified them through selective precipitation, and suspended them in water for subsequent freeze-casting and freeze-drying to enable the formation of aerogels. Silver aerogels prepared in this method have unique anisotropic microporous structures, with density precisely controlled by nanowire concentration down to 4.8 mg/cm3. The research has applications to stockpile stewardship, laser target development, and energy and resource security. It was featured as the journal cover in the December 2017 issue of Nano Letters.

Nanoparticles are nanoscale objects, typically 1–100 nanometers in size, that can be used for a variety of purposes, including formulating medicines or vaccines. For several years, LLNL has been developing a novel class of nanoparticles for biomedical applications that are highly biocompatible and offer advantages that other nanoparticle types do not. These nanolipoprotein particles (NLPs), consist of a phospholipid bilayer stabilized by an apolipoprotein scaffold protein and are lab-made versions of HDL or "good cholesterol" that are used by the body to transport cholesterol and triglycerides in the blood. While preliminary studies had previously demonstrated that the type of phospholipid used to synthesize these particles can affect their stability, it was unclear how specific phospholipid features impact the nanoparticle stability under physiologically relevant condition. An LLNL team recently conducted a thorough assessment of how phospholipid structure impacts stability of biomimetic nanoparticles in blood serum at 37° C, closely mimicking the environment and conditions the particles would encounter circulating in the blood stream. This key information has important implications for using these NLPs in vivo and provides insight into how to tune the particle stability for applications ranging from diagnostics to drug delivery. This study assessed the stability of NLPs with varying lipid compositions in blood serum. The results, published as the inside-front-cover feature article in the April 2018 issue of Nanoscale, provide a foundation for subsequent optimization of NLP composition to tailor the stability for particular in vivo applications. This research leverages and strengthens LLNL's nanoscale bioengineering capabilities to advance a cure for one of the world's most widespread and deadly diseases. 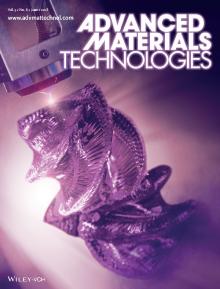 In an article featured on the back cover of the January 28 issue of Advanced Materials Technologies, a team of researchers described a method for fabricating optical quality silica and silica–titania glasses using three-dimensional (3D) printing. Key to this success was the combination of sol–gel derived silica and silica–titania colloidal feedstocks, direct ink writing (DIW) technology, and conventional glass thermal processing methods. Printable silica and silica–titania sol inks are prepared directly from molecular precursors by a simple one-pot method, which is optimized to yield viscous, shear-thinning colloidal suspensions with tuned rheology ideal for DIW. After printing, the parts are dried and sintered under optimized thermal conditions to ensure complete organic removal and uniform densification without crystallization. Characterizations of the 3D-printed pure silica and silica–titania glasses show that they are equivalent to commercial optical fused silica and silica–titania glasses. More specifically, they exhibit comparable chemical composition, SiO2 network structure, refractive index, dispersion, optical transmission, and coefficient of thermal expansion. 3D-printed silica and silica–titania glasses also exhibit comparable polished surface roughness and meet refractive index homogeneity standards within range of commercial optical grade glasses. This method establishes 3D printing as a viable tool to create optical glasses with compositional and geometric configurations that are inaccessible by conventional optical fabrication methods. This research has a range of applications across the DOE and NNSA mission space, including laser technologies and space-based optics. 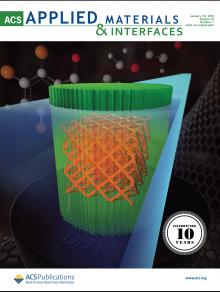 As TPL matures, metrology and inspection become a crucial step in the manufacturing process to ensure that the geometric form of the end product meets design specifications. X-ray-based computed tomography (CT) is a nondestructive technique that can provide this inspection capability for the evaluation of complex internal 3D structure. However, polymeric photoresists commonly used for TPL, as well as other forms of stereolithography, poorly attenuate x rays due to the low atomic number (Z) of their constituent elements and therefore appear relatively transparent during imaging.

To address this issue, researchers have developed optically clear yet radiopaque photoresists for enhanced contrast under x-ray CT. As reported in the cover article of the January 10, 2018 issue of Applied Materials & Interfaces, this new AM feedstock increases x-ray attenuation by a factor of more than 10 times while preserving the resolution of parts produced on the millimeter scale with sub-150-nm features. This formulation is expected to play a critical role in enabling fabrication of functional polymer parts to tight design tolerances for application across the DOE and NNSA mission space. 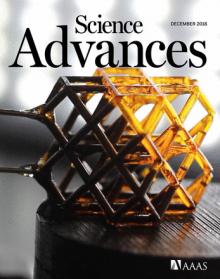 As described in the cover article of the December 2018 issue of Science Advances, a team of researchers have introduced a new class of metamaterials that can nearly instantly respond and stiffen 3D-printed structures when exposed to a magnetic field, a development that could be applied to next-generation helmets, wearable armor, and a host of other innovations. These "field-responsive mechanical metamaterials" (FRMMs) employ a viscous, magnetically responsive fluid that is manually injected into the hollow struts and beams of 3D-printed lattices. Unlike other shape morphing or so-called "4D-printed" materials (the fourth dimension being time), the overall structure of the FRMMs does not change. The fluid's ferromagnetic particles located in the core of the beams form chains in response to the magnetic field, which stiffens the fluid and the lattice structure as a result. This response happens rapidly—in less than a second.