Additive manufacturing methods provide engineers with almost unlimited flexibility to design components. However, engineering intuition cannot comprehensively explore this large design space, so component design is currently the limiting step in additive manufacturing research. To remove this design bottleneck, we developed computational design software called Livermore Design Optimization (LiDO) for topology optimization, whereby the optimal layout of material for a part is determined in order to accomplish a given objective (e.g., stiffness) subject to design specifications (such as mass). LiDO interfaces with new algorithms that enable it to solve structural topology-optimization problems consisting of more than 800 million design variables while remaining general enough to accommodate stress constraints. These algorithms have been implemented in the new HiOp optimization library (Petra 2017). LiDO also incorporates two novel design parameterizations based on (1) Fourier series that do not require filtering and (2) the radii of rods in lattice unit cell structures that enable efficient multiscale material design. Using homogenization theory, finite element methods, and machine learning methods, LiDO computes the effective elasticity of a lattice cell as a function of rod radii so that finite element methods are not required to resolve each individual unit cell during design optimization. Finally, LiDO implements topology optimization under uncertainty using a novel two-level parallel approach: the first level of parallelism is over the finite element mesh, and the second level is over samples of uncertain parameters.

Results on uncertain loading demonstrate that designing for minimum average compliance over uncertain loads yields a better design than minimizing compliance for an average load. With these new design optimization capabilities, LiDO has the potential to transition to programmatic applications as a tool to improve Laboratory additive manufacturing capabilities in support of its scientific, defense, and weapons missions.

Additive manufacturing (AM) methods have enabled the manufacture of parts and materials with unprecedented control over geometry and composition. However, this new technology encompasses a large design space that cannot be explored fully using engineering intuition alone. In addition, designs for AM production must tolerate uncertainty in operating conditions (such as loading) and manufacturing variations (which result in material defects). As a result, a key limiting factor in advancing AM technology is the ability to generate new high-performance designs through more systematic means (National Research Council 2008).

Topology optimization generates novel designs for AM by computing the material layout of a part or metamaterial by solving an optimization problem formulated by providing a design parameterization, physics model, design specifications, and a quantity-of-interest to minimize (or maximize) as an objective (Bendsoe and Sigmund 2011). The following is an example of the information that is used in a topology-optimization computation:

We accomplished the first intermediate objective (Arrighi et al. 2018), but none of the remaining objectives were accomplished due to changes in funding level and project scope. We determined that additional capability was needed to develop more efficient topology-optimization methods that could eventually solve our original problem. As a result, we performed the following steps instead: 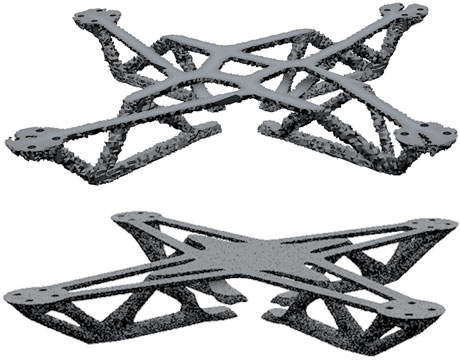 Our research advances the science, technology, and engineering competencies that are the foundation of the NNSA mission. Specifically, this research enhances the additive manufacturing capabilities at Lawrence Livermore National Laboratory by providing engineers with a computational tool that generates novel designs that perform better than engineering intuition alone. As such, this work supports Laboratory missions in weapons, science, and defense that already make use of additive manufacturing. It also supports the Laboratory’s core competencies in high-performance computing, simulation, and data science. Its likely impact on individual programs will be to provide an internal tool that integrates with existing Laboratory investments in AM and high-performance simulation for programmatic design applications and to incorporate quantitatively known uncertainties in operating conditions and manufacturing processes into the design process. This project has already brought in new staff and has contributed to starting up the Center for Design Optimization at the Laboratory. We expect to add new capabilities to LiDO, including designing with materials with nonlinear elastic behavior, multiphysics, and transient phenomena.

Moving forward, we are primarily transitioning this topology-optimization work to programmatic applications by positioning it as a tool to improve current design processes. The Laboratory's Center for Design Optimization currently collaborates with Autodesk to interface LiDO with Autodesk level-set-based design approaches. We anticipate a potential transfer of LiDO technology to industry as the software and optimization methods mature. The Laboratory also received a DARPA grant with collaborators at UT-Austin and UC-Berkeley on design optimization two years ago, so we believe there is potential funding for future work from DOD- and DHS-related sources, as well as future academic collaborations.