Clinical studies have shown that vagus nerve stimulation (VNS) can affect a host of diseases and disorders ranging from arthritis to migraine headaches. However, VNS as a treatment has not gained wide acceptance because the mechanism by which it works is largely unknown and its effects are difficult to reproduce. The purpose of this feasibility study was to enable investigation of the effects of peripheral nerve stimulation on brain and gut disorders. To that end, we developed implantable neural interfaces that can be used for electrical stimulation of the central nervous system and the gastrointestinal system simultaneously, as well as for the recording and sensing of the physical and chemical effects of stimulation. Both interfaces were designed to be implanted in a rodent animal model, as well as for human applications.

This work lays the foundation for development of an implantable device with multiple modulation and biosensing modalities that is designed to interface with the nerves and organs of an awake and behaving animal subject. Currently, there are no off-the-shelf systems with these capabilities. This is due to the fact that few researchers have the expertise to develop biocompatible and flexible neural interfaces. In addition, the idea that there may be a bi-directional connection between the gut and the brain, and between the brain and the immune system through the vagus nerve has only recently gained wide acceptance in the scientific and medical communities. This work leverages Lawrence Livermore National Laboratory’s expertise in developing flexible biomedical implants for neuromodulation and biosensing.

In 2015, University of Virginia scientists announced their finding of a direct link between the brain and the immune system (Louveau et al. 2015). Their discovery of lymphatic vessels in the mouse brain changed the long-held view that the body’s immune cells, carried by lymphatic vessels, do not interact with the brain. This connection opens important new questions about how brain functions are affected by the body’s immune system. This news came as the case for another link, one between the brain and the gut’s microbiota, gained attention in the scientific community. Interestingly, an investigational therapeutic method known as vagus nerve stimulation (VNS) supports the idea that there is a bi-directional connection between the gut and the brain, and between the brain and the immune system. By applying VNS, a variety of disorders and illnesses ranging from major depressive disorders (e.g., migraine headaches) to gastrointestinal (GI) disorders can be modulated. This method is only used by a handful of medical practitioners and researchers. Given the lack of understanding of the mechanisms of this therapy, the experimental results are difficult to reproduce and vary across researchers' findings. The mechanisms behind VNS therapy remain a mystery due to the lack of technologies available to study the effects of VNS. This therapeutic method involves electrical stimulation of the peripheral nervous system on timescales of milliseconds to seconds. Currently, there are no methods to monitor the response of the organs and the immune system at these timescales.

Lawrence Livermore National Laboratory is in a unique position to be the first to discover the most fundamental biological mechanisms underlying the gut-and-brain link, and how that link may be used to develop more effective therapies for brain, gut, and immune-system disorders. Our research leveraged the Laboratory's expertise in developing biocompatible implants for modulation and recording of the body’s electrical activity. We designed a neural interface that can electrically stimulate the vagus nerve and can be modified for biosensing in the gut. These neural interfaces were fabricated at Livermore's Center for Micro and Nanotechnologies microfabrication facility (neurotech.llnl.gov). This system can be expanded to monitor the immune system and central nervous system simultaneously.

In this feasibility study, we designed an implantable device that can interface with the vagus nerve of both small animal subjects (such as rats) and humans for electrical stimulation. The electrode material and flexible substrate can be modified for use for biosensing in the GI tract.

Employing the Laboratory’s polymer-microfabrication technologies, the devices were fabricated using a flexible substrate that allowed for hardware-feature sizes small enough to "cuff" around a rat's vagus nerve with minimal tissue damage and discomfort. Using microfabrication technologies allowed us to manufacture devices composed of thin-film metal wires that are flexible yet still conductive under strain. The current design (Figure 1) has two sets of electrode pairs for bipolar stimulation. The electrical cable is curved to fit on a six-inch carrier wafer while allowing for the required length. The VNS devices were also designed to fit a human: they are composed of biocompatible materials and use a processing technique that passed human-grade biocompatibility tests. 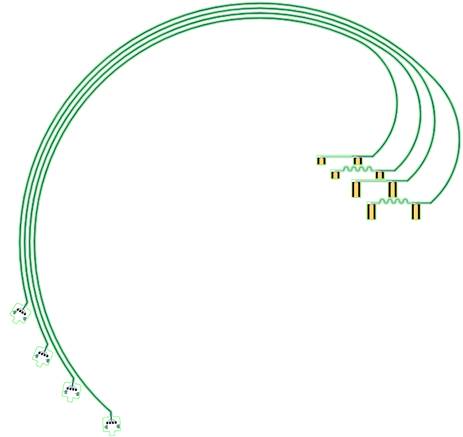 Figure 1. Four versions of full-length VNS cuff electrodes used for rats. The cable has a circular configuration designed to fit on a 10-cm wafer. The black and yellow rectangular pads (at the right ends of the cables) are the electrode pairs; the square pads (at the left ends of the cables) are contact pads that are mated to electrical connectors.

Because the microfabrication method results in two-dimensional (2D) films, and the vagus nerve is a three-dimensional (3D) object, we had to develop a method to form the 2D devices into flexible 3D films that can snugly wrap around a nerve. For this reason, we investigated and identified thermoplastic polymers that are biocompatible and can be processed using our microfabrication methods. The resulting thermoplastic polymers can be thermoformed at temperatures suitable for processing (150 to 200°C) and have passed standard tests for toxicity and reactivity.

This project supports both the DOE's goal of enabling the transformative growth of basic and applied scientific research and Livermore's research challenge in chemical and biological security, specifically through the creation of tools for the rapid development of medical countermeasures. This project also enhanced the Laboratory's core capabilities in microfabrication and material-science engineering, which were used to design biocompatible neural interfaces that are fabricated in ways not commercially available. This research lays the foundation for the development of implantable devices that will allow researchers to investigate the mechanisms behind the healing effects of VNS therapy and to understand the bi-directional connections between the body and the brain.

We completed the design of biocompatible neural interfaces for use in VNS of both rats and humans; identified thermoplastic polymers that are biocompatible and suitable for microfabrication; and developed and tested an electrode material for the neural interface. Future work will be to fabricate the devices and test them in vivo. Personalized medicine and bioelectronic medicine are fields of research being heavily invested in both by federal government agencies (e.g., the National Institutes of Health, the Defense Advanced Research Projects Agency, and the National Science Foundation) and by industry (pharmaceutical companies and biomedical-device manufacturers). The technologies initiated during this feasibility study's research work can be used as platform technologies across such future research and development programs.