We developed a steady-state plasma-flow reactor to investigate gas-phase physical and chemical processes that occur at high temperature (1,000 < T < 5,000 K) and atmospheric pressure. The reactor is used to study chemical fractionation and debris-formation processes under conditions relevant to nuclear fireball condensation. Our goal was to improve our physical understanding of plasma-condensation chemistry for radiochemical device assessments and predictive fallout models. A related goal was to identify processes that control uranium volatility during debris formation. The reactor consists of a quartz glass tube attached to an inductively coupled plasma (ICP) generator via an adaptor. The heat- and mass-transfer characteristics of the system were determined using computational fluid dynamics simulations bounded by temperature measurements. In situ spectroscopy measurements (emission and infrared) were used to obtain spatially and temporally resolved gas-phase molecular data. We used the flow reactor to investigate the gas-phase oxidation and condensation of uranium, aluminum, and iron atoms over short time scales (tens of milliseconds). The experimental data provided constraints on chemical kinetic models that describe the chemical pathways for condensation. Electron microscopy techniques were used to determine the composition, size, and morphology of particles formed in the reactor. The results show that the nucleation and growth of metal-oxide particles in rapidly cooling gas is closely coupled to the kinetically controlled chemical pathways for vapor-phase oxide formation. Supersaturation rates are important in determining the size of nanocrystalline particles. Uranium oxides form under non-equilibrium conditions, resulting in mixed nanocrystalline oxide phases. The relative amounts of the different uranium oxides are sensitive to the amount of oxygen in the system. This indicates that the oxidation-reduction chemistry of uranium in the fireball may be the missing piece needed to explain uranium volatility during debris formation.

After a nuclear explosion, the interaction of the fireball with the surrounding environment results in a non-uniform distribution of radionuclides in the debris field. As debris are formed, radionuclides are fractionated in accordance with their different chemical properties. Refractory elements that condense at high temperature are strongly partitioned into early formed debris and are concentrated near the site of the explosion. Volatile elements with higher oxide vapor pressures condense at later times and are more widely dispersed throughout the debris field. Uranium is expected to exhibit refractory behavior based on the thermodynamic properties of its oxides. However, observational evidence from the test program revealed that uranium is chemically fractionated relative to early formed refractory condensates (Moody et al. 2015). This poses a challenge for device assessments because radiochemical measurements of post-detonation debris samples must be adjusted for uranium volatility before they can be properly interpreted. Data correction methods were established based on well-defined empirical relationships, but the underlying processes that cause uranium volatility have never been determined.

To gain deeper insight into chemical fractionation and uranium volatility, it is necessary to expand our experimental and theoretical knowledge of plasma condensation chemistry. This will allow us to advance from a purely empirical knowledge base toward a first-principles understanding that permits predictive modeling of the debris-formation process. The main objective of this project was to establish an experimental capability that would facilitate this development. We fabricated and tested a steady-state ICP flow reactor and used it to study the relationship between physical conditions during plasma condensation and the chemistry of the materials formed. A secondary objective was to acquire experimental data that would help identify the mechanisms for uranium volatility.

Our plasma flow reactor consists of a quartz glass tube attached to an inductively coupled argon plasma generator via an adaptor, as illustrated in the figure below. During the early stages of the project, significant effort was invested in understanding the performance characteristics of the system. Heat and mass transfer processes were modeled using computational fluid dynamics simulations bounded by temperature measurements. This calibration process was essential for obtaining quantitative data on the temperatures at which chemical processes occurred. The calibrated system was then used to investigate gas-phase physical and chemical processes involving rapid cooling on time scales of tens to hundreds of milliseconds at atmospheric pressure. Chemical reactants are input as gases, aqueous solutions, and nanoparticles (i.e., silica). 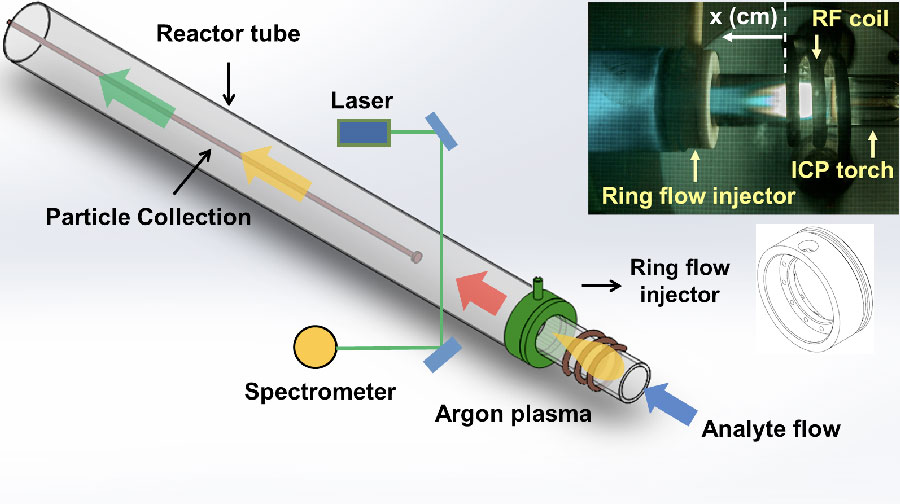 Schematic of the plasma flow reactor developed for this project. In situ optical spectroscopy measurements are used to constrain chemical kinetic pathways during metal or hydrocarbon oxidation. A particle collection probe allowed samples to be taken at different positions (temperatures) along the axis of the reactor tube for post-experimental characterization using electron microscopy techniques. Inset photo shows detail of the inductively coupled plasma (ICP) torch and radio frequency (RF) coil used to generate the plasma. The blue color of the plasma is due to the visible emission of aluminum monoxide molecules formed in the plasma.

In situ line-of-sight optical emission and infrared absorption spectroscopy were used to identify molecules that formed during cooling of reactants after they passed through the plasma. A sample collection probe inserted from the open end of the reactor was used to collect condensed materials and analyze them ex situ using scanning electron microscopy and transmission electron microscopy. This study substantially increased our understanding of the chemical kinetics of high-temperature gas reactions and particle formation involving the condensation of metal oxides and provided new insight into the uranium volatility problem.

Our ability to create fractionation patterns in the laboratory like those observed in nuclear debris indicates that the flow reactor may be used to develop a physical basis for empirical radiochemical corrections that underpin our nuclear forensics and stockpile stewardship device assessments. Computational models used for emergency response and consequence management following a nuclear event also require a deep understanding of fractionation mechanisms. In this case, an accurate physical description of particle formation and how radionuclides are incorporated into the particles is essential to model performance.

This study met both its primary and secondary objectives. We established a new experimental capability with the capability to provide new insights into the chemical fractionation mechanism and debris formation. We also acquired data that suggest uranium volatility is linked to the availability of oxygen during fireball condensation.

In this study, we developed a new experimental capability to advance our understanding of gas-phase chemical reactions of metal oxides and the physical and chemical properties of condensed particulates. This project provides a new technical basis for improving our understanding of chemical fractionation and affords new insights into nuclear-debris formation mechanisms.

Experiments using the flow reactor are continuing thanks to funding support provided by a Defense Threat Reduction Agency Basic Research Grant and an NA-22 Joint Venture Project. Important work remains to develop a better understanding of fractionation mechanisms and debris-formation processes. We continue to seek funding opportunities to enable this research into the foreseeable future.