This work will provide the first demonstration of x-ray light sources driven by laser wakefield acceleration on picosecond-scale lasers with energies above 200 J. The research will enable exploratory efforts into regimes of high-energy-density physics that have been hitherto unreachable, and provide insights into high-intensity laser–plasma interactions and laser wakefield acceleration on picosecond timescales and help address important physics issues related to shock physics, opacity, planetary sciences, and relativistic laser–plasma interactions.

Understanding material properties under extreme conditions of temperature and pressure is critical for a variety of physics fields, including astrophysics, high-energy-density science, and Inertial Confinement Fusion. High-energy-density science facilities such as Livermore's National Ignition Facility and the OMEGA laser at the Laboratory for Laser Energetics in Rochester, New York, are now uniquely able to recreate in the laboratory, conditions of temperature and pressure that were thought to be only attainable in the interiors of stars and planets. Developing efficient, versatile, and fast (sub-picosecond-scale) x-ray probes with energies larger than 50 keV is essential to diagnose such transient and extreme states of matter at these facilities. For instance, high-energy x rays are required to radiograph the dynamics of imploding fusion target capsules at the National Ignition Facility, or the temperature and pressure of warm dense matter via absorption spectroscopy or scattering techniques. We intend to extend the development of x-ray sources to four high-energy-density science facilities: the National Ignition Facility; OMEGA; the Megajoule Laser facility near Bordeaux, France; and the Titan laser at Livermore's Jupiter Laser Facility. Each of these lasers has unique characteristics that will allow us to explore complementary regimes of laser-driven electron acceleration and x-ray production. Our x-ray sources will be based on laser wakefield acceleration, in which electrons are accelerated in a plasma wave created by the interaction of an intense laser pulse with a gaseous target. Our work will be the first demonstration of x-ray light sources driven by laser wakefield acceleration on picosecond-scale lasers with energies above 200 J. The experiments will produce picosecond, collimated, broadband x-ray beams, as well as high-energy electron beams.

Although a large number of laser wakefield acceleration x-ray experiments have been performed in a regime where the laser pulse length is about half the plasma period, very little is understood about the characteristics of such sources on longer-pulse-duration (about 1 ps) facilities. No experiments have yet been done on this subject at major high-energy-density science laser facilities. In addition to providing a unique x-ray source for high-energy-density studies, our experiments will clarify the physics of laser wakefield acceleration and subsequent x-ray radiation for picosecond, high-energy laser facilities. We expect that our experiments will deliver picosecond, collimated, broadband x-ray beams beyond 50 to 100 keV, as well as high-energy electron beams up to the gigaelectron-volt level. In addition to extending the understanding of the physics of short-pulse, high-intensity laser interactions with plasmas, our project will result in a new and unique x-ray platform for scientists at the aforementioned high-energy x-ray facilities. These x-ray sources have unique properties that make them ideal probes and back-lighters for time-resolved spectroscopy; x-ray imaging; Compton radiography, which is used as a diagnostic in Inertial Confinement Fusion experiments; and Laue diffraction, which is used to determine crystal structure. Such experiments can help address a number of important physics issues related to shock physics, opacity, planetary sciences, and relativistic laser–plasma interactions.

Our work will make possible exploratory efforts into regimes of high-energy-density physics that have been hitherto unreachable, and provide insights into high-intensity laser–plasma interactions and laser wakefield acceleration on picosecond timescales. The research therefore supports Livermore's core competencies in high-energy-density science and lasers and optical science and technology, as well as DOE's goal of an environmentally responsible, secure, and resilient U.S. energy infrastructure through advancing the science of Inertial Confinement Fusion.

In FY17 we (1) demonstrated the production of betatron x-ray radiation in the self-modulated wakefield accelerator regime with experiments performed on the Titan laser at the Jupiter Laser Facility; (2) performed particle-in-cell methodology simulations in collaboration with the University of California, Los Angeles, to explain x-ray production in the self-modulated wakefield accelerator regime; and (3) conducted additional experiments at the Titan laser facility to create a detailed characterization of the betatron x-ray source using picosecond-scale lasers. 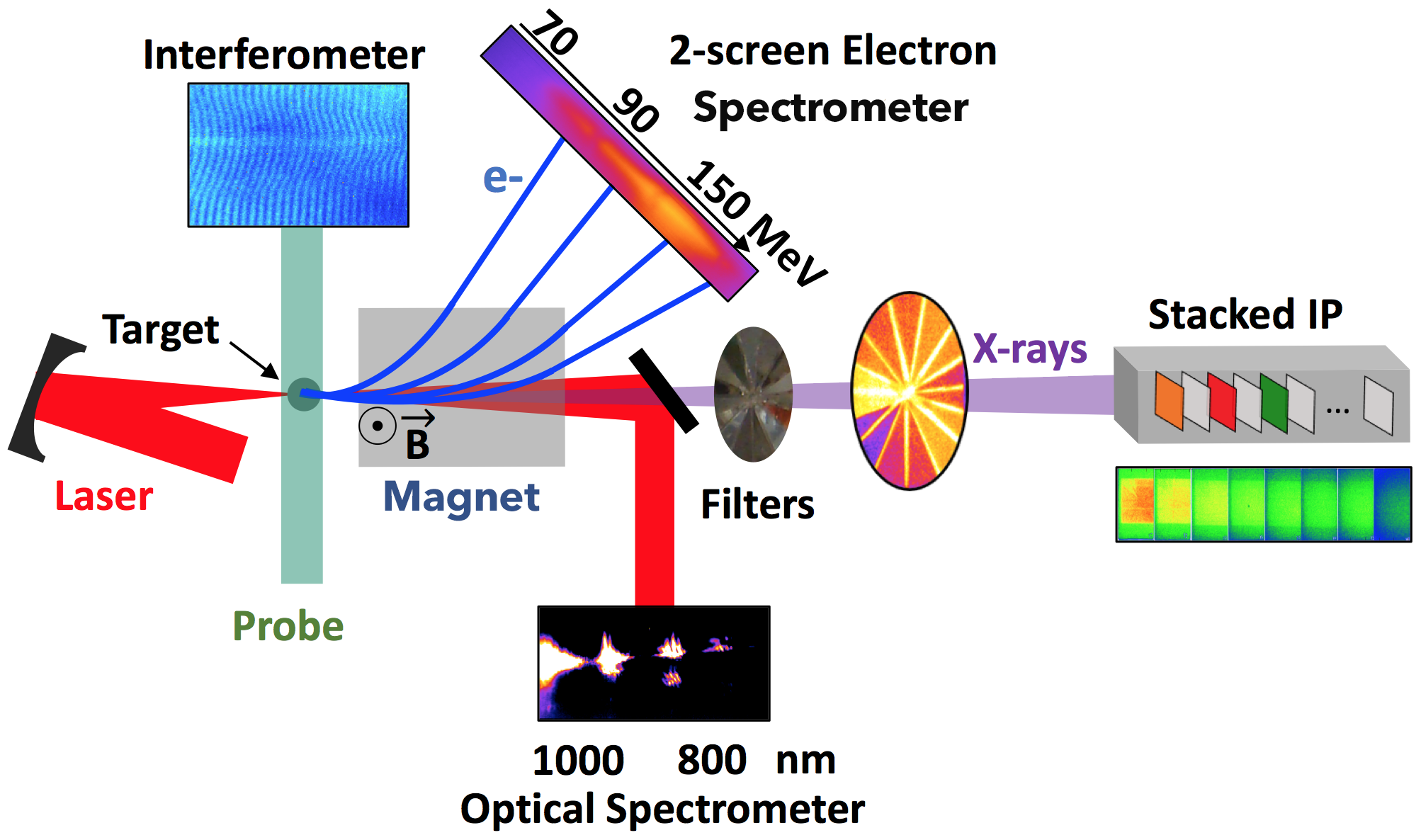 We designed this experimental setup for the development of x-ray light sources driven by laser wakefield acceleration on Lawrence Livermore’s Jupiter Laser Facility. The image shows the novel optical, electron, and x-ray diagnostics developed as part of this project. (IP = image plates, e- = electron, B = B-field.)