The availability of potable water is an ever-increasing concern in the U.S. New economical methods of purifying brackish and contaminated water are urgently sought. Unlike sea water, the salinity of this water can often change substantially throughout the year. Capacitive deionization (CDI) is a technology that can potentially treat brackish water at substantially lower cost than competing technologies. However, in the past it has been limited to feed water with very low salinity, and has been incapable of accommodating the upper ranges of salinity that some freshwater sources reach.

The goal of this project was to increase the salinity of water that can be treated by a CDI device in a single pass by introducing phase-charging of multiple electrode pairs, thus increasing the amount of salt that can be removed by treating the same volume of water with multiple electrode pairs as the water passes through the treatment device. We developed an extensive CDI model that incorporates all known factors affecting salt removal in order to predict what the concentration output of each electrode pair would be so that the CDI device's electrodes could be operated in a constructive mode where salt removal would be cumulative, rather than a destructive mode where work done during earlier stages of desalination is undone during later stages. Experiments were conducted to characterize several of the parameters that affect the desalination process, such as electrode surface charge and Faradaic reactions (i.e., heterogeneous charge-transfer reactions occurring at the surface of an electrode) so that they could be modeled accurately.

We expanded and modified our experimental capabilities to enable individual control of eight electrode pairs simultaneously. Using this new setup, we were able to demonstrate a concentration reduction of 5 grams per liter (g/L), more than was previously achieved in a single stage of desalination. We also discovered that flow and mixing were important limiting factors; therefore future work on phased charging will require decoupling of the individual stages to reduce mixing.

One of the remaining challenges to CDI technology is that the maximum salinity that can be treated in a single pass is dictated by the capacity of the material used for treatment: the amount of salt an electrode pair can adsorb is proportional to the amount of charge it can hold. Once saturation is reached, the device must be discharged (regenerated) before it can treat more water. For continuous operation, the device is cyclically charged and discharged. To address this issue, we increased the maximum salinity that can be treated by phasing the charging of the electrodes. Energy-optimized fteCDI cells consist of 10-20 pairs of thin electrodes to reduce the device resistance. Currently, all pairs are charged and discharged at the same time. By timing the charge step (labeled T1 through T3 in Figure 1) for each electrode so that the charge time equals the time the water takes to traverse the electrode pair, it should be possible to "stack" the desalination effect of several pairs, as shown in Figure 1. This results in a salt reduction that is greater than what can be obtained with a regular charge cycle, and thus exceeds the material limit. Since a regular cell could desalinate sea water in five or six passes, a cell with 10 pairs should be able to desalinate sea water in a single pass with phased charging. 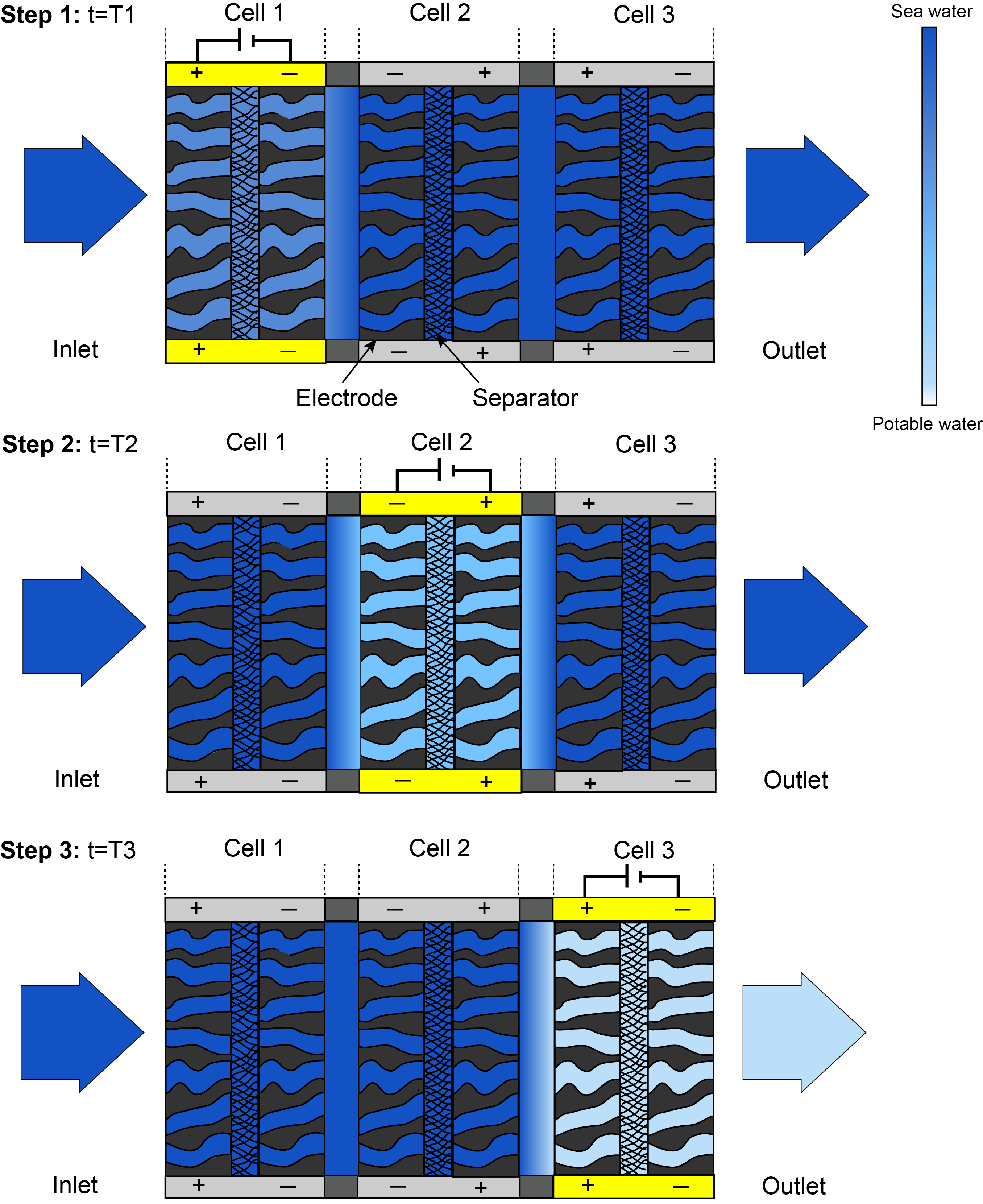 Figure 1. An example of phased charging using three electrode pairs (cells). In this example, the water is stagnant during the charging steps. In Step 1, only Cell 1 is charging. The desalinated volume is moved to Cell 2 (Step 2), and then Cell 2 charges, desalting the water further, while Cell 1 can discharge and prepare for the next charging step. In Step 3 the volume is moved to Cell 3 and Cell 3 charges, further reducing the salt concentration. The color bar (upper right corner) and inlet/outlet arrows indicate the progression from highly saline water (dark blue) to the end-product of desalinated water (light blue). Timing (t) of each charge step is indicated by labels T1 through T3.

The objectives of this project were to (1) expand our existing desalination model to include variable flow rate, variable charging rate, the transmission-line character of the electrode, diffusion and dispersion, surface functional groups, and Faradaic reactions; (2) use the model to determine the impact of flow rate, phase shift, and charging rate on the concentration reduction that can be achieved, as well as the energy cost and water recovery, and find optimal operating conditions for phased charging; (3) build a test setup consisting of software and hardware capable of individually addressing up to 10 pairs of electrodes and control their charge and discharge cycles independently to obtain full control of the charge process; and (4) operate an fteCDI cell with multiple pairs using this setup and verify that the output matches the model predictions, using feed water with salt concentrations between 50 and 500 millimoles.

In principle, the operation of a CDI device is straightforward: The amount by which the salt concentration is reduced is proportional to the flow rate of the feed water and the charging current. In practice, there are numerous effects that impact the concentration reduction. At higher device operating voltages, the current can drive a reduction-oxidation reaction instead of charging the capacitor and adsorbing salt. At low operating voltages, instead of adsorbing salt ions when the charge is increased, co-ions (i.e., ions of the same charge as those in the feed water) may be expelled from the double layer, resulting in no net-reduction of the salt concentration. Charged groups on the surface can lead to ion adsorption at zero charge, and upon charging these ions will be desorbed before any desalination takes place. Diffusion (dashed green line, Figure 2) can smooth-out sharp gradients between treated and untreated volumes of water in the device. Finally, desalinated water and brine can mix in the device as it cycles between desalination and regeneration. Some of these effects are illustrated in the desalination curve in Figure 2. 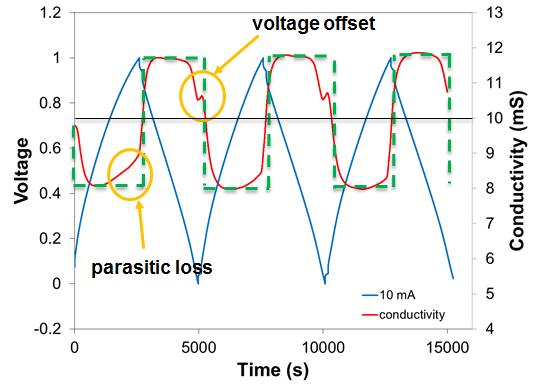 Successful implementation of phased charging requires a good knowledge of the concentration response. The concentration reduction has to be in-phase between all cells that are used. If it is out of phase, later (i.e., downstream) cells may be desorbing salt into water that has been desalinated in previous (upstream) cells, canceling out the work done in those cells rather than enhancing it. Thus, substantial effort was made to create a process model that predicts the concentration response of a cell depending on the applied operational parameters, and is capable of accurately modeling the operation of multiple cells in series.

A finite-element model that includes all of the elements discussed above was built with COMSOL modeling-and-simulation software. Mass transport and basic double-layer charging mechanisms were adapted from established desalinization models. Faradaic reactions and the effects of surface charge were studied in this project to better quantify their effect.

Surface charge was quantified by titration, a method of quantitative chemical analysis used to determine the concentration of an analyte. All carbon materials used in this study contain acidic and basic surface groups, which become charged groups when immersed in water. The total amount of surface charge depends on the pH of the water in the cell. By placing the material solutions with different initial pHs and measuring the pH change after equilibration time (i.e., when the forward reaction proceeds at the same rate as the reverse reaction), the number of functional groups and their acid constants could be measured. This behavior can be quantified using a simple acid-base model.

Faradaic reactions play a major role in CDI technology. They consume charge and energy as they occur and can change the pH of the solution. There are several reactions that are expected to occur in a CDI cell: oxygen reduction, carbon corrosion, hydrogen reduction, and oxygen formation. Reactions were studied by applying constant potential to a cell and measuring equilibrium current. The measured current can be fit to an exponential function of the voltage, as expected, and the limiting electrode can be readily identified, but the data can not cleanly be fit to a single reaction, and we assume that multiple reactions are occurring. Integrating Faradaic reactions into the model shows that the reactions can change local pH substantially and introduce large gradients in the cell, and they can cause complex interplay of electrical potentials during the process. For example, it is possible to form oxygen on one electrode and reduce said oxygen on the other electrode, which can lead to an oscillation of local potentials as a purely capacitive electrode now turns into an electrode at which a reaction occurs.

We discovered that both energy efficiency and removal rate increased when the flow rate was increased. Further investigation revealed that the cause was flow efficiency: When the charging time is short compared to the time it takes to flush out the cell volume, treated water is left behind in the cell when the cell is regenerated. If the flow rate is high, however, most of the treated water is swept out of the cell. While the complete model captures this dynamic, the root cause was not identified until a simpler model was used that focused on the mixing in the cell. This simpler model led to a set of equations that can readily be used to find an optimal operation parameter space for a given cell, and revealed that a batch-process mode, hitherto largely ignored in the literature, may match or exceed the efficiency of the commonly used continuous-flow process. Model results for flow efficiency show how the correct flow parameters can easily change the performance of the device by a factor of two or more. During this research we discovered that the concentration reduction has a major impact on the energy efficiency, but it is frequently ignored in the literature. Instead, performance is reported in energy cost per adsorbed mole of salt, which leads to a distortion of the true performance.

Mixing within the cell is an important issue for phased charging. While we successfully coupled two electrode pairs and demonstrated a concentration reduction of greater than 5 g/L, these kinds of reductions cannot easily be accomplished while maintaining good energy efficiency and throughput. Mixing between the two cells leads to a lower than expected reduction of the concentration. We will investigate decoupling of individual cells in future projects to exploit the concept of phased charging more fully.

Resource security is a growing part of the Lawrence Livermore National Laboratory’s national security mission. At DOE, water treatment has become a topic of increasing importance: Treatment of brackish water will play a major role for increasing the country's water-supply security and resilience. This project’s research has demonstrated that CDI has the potential to become the most cost effective and efficient method of water desalination. The project has also resulted in a substantial improvement of CDI process synthesis and cell assembly, and expanded our characterization tools, capabilities will be leveraged in future desalination projects. It also has helped establish the Laboratory’s leadership role in the field of CDI while contributing to its resource-security mission area. Our findings in flow efficiency and concentration reduction will contribute substantially to improving CDI performance reporting and help the field identify roadblocks to greater efficiency.

While the primary goal of increasing the concentration reduction that can be achieved with stacked flow-through electrodes was not fully met during this project, the tools and models that were developed have substantially enhanced the Laboratory's desalination capabilities and the general understanding of the CDI process. The process model in particular has become a tool that is used almost daily for modeling performance and operation of a scaled-up desalination device developed by the California Energy Commission. We believe that the published results from this project will have a substantial impact on the field of desalination technology research.