The goal of this project was to test the feasibility of using a novel sulfate exchange reaction to increase the interlayer adhesion strength in thermoplastic parts that are fabricated using fused deposition modeling (FDM), a three-dimensional printing method for rapid prototyping of plastic components. Although FDM has been used to fabricate objects composed of a wide variety of materials, this method has a critical flaw in the form of poor layer-to-layer adhesion, which results in anisotropic material properties and decreased mechanical strength along the product's z-axis build direction. The layer-adhesion problem is caused by insufficient polymer-chain entanglement. We hypothesized that a catalytically driven sulfate-exchange reaction occurring along the backbone of a thermoplastic containing sulfates could be used to force entanglement by breaking and reforming polymer chains at the print-layer interface. If successful, this solution could then be applied to other applications such as bonding plastic components without the use of adhesives.

With these goals in mind, we synthesized bisphenol polysulfate, extruded it into a filament, and used it to print complex shapes. We printed a series of test specimens in xy- and zx-axial orientations and tested their tensile strength to compare build-direction performance. Although we performed a series of experiments to induce sulfate exchange during the printing process, the zx specimens only reached 50 percent of the strength of the xy specimens.

Additive manufacturing (AM), also known as three-dimensional (3D) printing, encompasses a wide variety of rapid, on-demand prototyping methodologies used to fabricate preproduction models and end-use products. Plastic is the most widely used AM material and FDM is the most widely used printer technology (Sculpteo 2018). However, the overall usefulness of AM technology is hampered by a limited selection of raw materials, many of which have undesirable physical and chemical properties. In contrast to traditional manufacturing, wherein material is either molded or removed through subtractive processes, AM generally builds objects layer-by-layer, which requires materials that are also amenable to manipulation, patterning, etc. Although AM produces parts in forms that would be difficult or impossible to produce using traditional manufacturing techniques, defects such as inclusions, voids, and inhomogeneities can concentrate along successive layers, significantly weakening the overall part. A well-known example of this phenomena occurs in FDM printed parts, which is perhaps the most common form of AM and relies on the extrusion of melted thermoplastic in a 2D pattern, followed by successive layering to arrive at a 3D structure. FDM parts are mechanically inferior to injection-molded parts and display anisotropic mechanical properties due to poor interlayer adhesion, particularly along the z-axis build direction.

There have been a variety of attempts to improve the layer-to-layer adhesion issue of FDM. The most common approach is simple optimization of the print orientation (Ahn et al. 2002, Vega et al. 2011, Thrimurthulu et al. 2004, Sood et al. 2009). This approach does not necessarily solve the layer adhesion problem, but it does conceal the anisotropic nature of FDM-produced parts such that the overall mechanical properties of the part are sufficient for the end-use application. More recent efforts focused on addressing the material itself include facilitating cross-linking reactions, such as through post-print processing with ionizing radiation (Shaffer et al. 2014). An extreme example of induced crosslinking entails the use of covalently adaptable networks (CANs) (Yang et al. 2017, Appuhamillage et al. 2017, Davidson et al. 2016). Thermosets are generally not amenable to FDM because they consist of an infinitely high molecular weight (MW) cross-linked structure that cannot be melted and will not flow at temperatures before thermal degradation. However, CANs are a class of thermosets with built-in dynamic chemistries where reversible covalent bonds allow the bulk material to molecularly rearrange its polymeric segments in response to an externally applied stimulus (e.g., heating).

All CAN materials rely on exchange reactions in which bonds are broken and reformed repeatedly in equilibrium. We focused our attention on a recently discovered aromatic sulfate system that displays exchange reactivity in the presence of a suitable catalyst. We found that when a sufficiently strong organic superbase or fluoride salt catalyst is added to the system at elevated temperature (greater than 100°C), an exchange reaction occurs. We conducted exchange reaction experiments with bisphenol-polysulfate, which showed promising results. We physically mixed samples with high and low MW through dissolution. Adding the catalyst and heating the mixture produced a polymer with a MW between that of the high-MW and low-MW polymers of the initial mixture. The "growth" of the low-MW polymer component (rather than decreasing to an even lower MW) indicated that a dynamic bond-breaking and bond-reformation equilibrium process occurred along the backbone of the polymer, promoting this chemistry as a means of forcing polymer-chain entanglement during FDM printing (see the figure below). 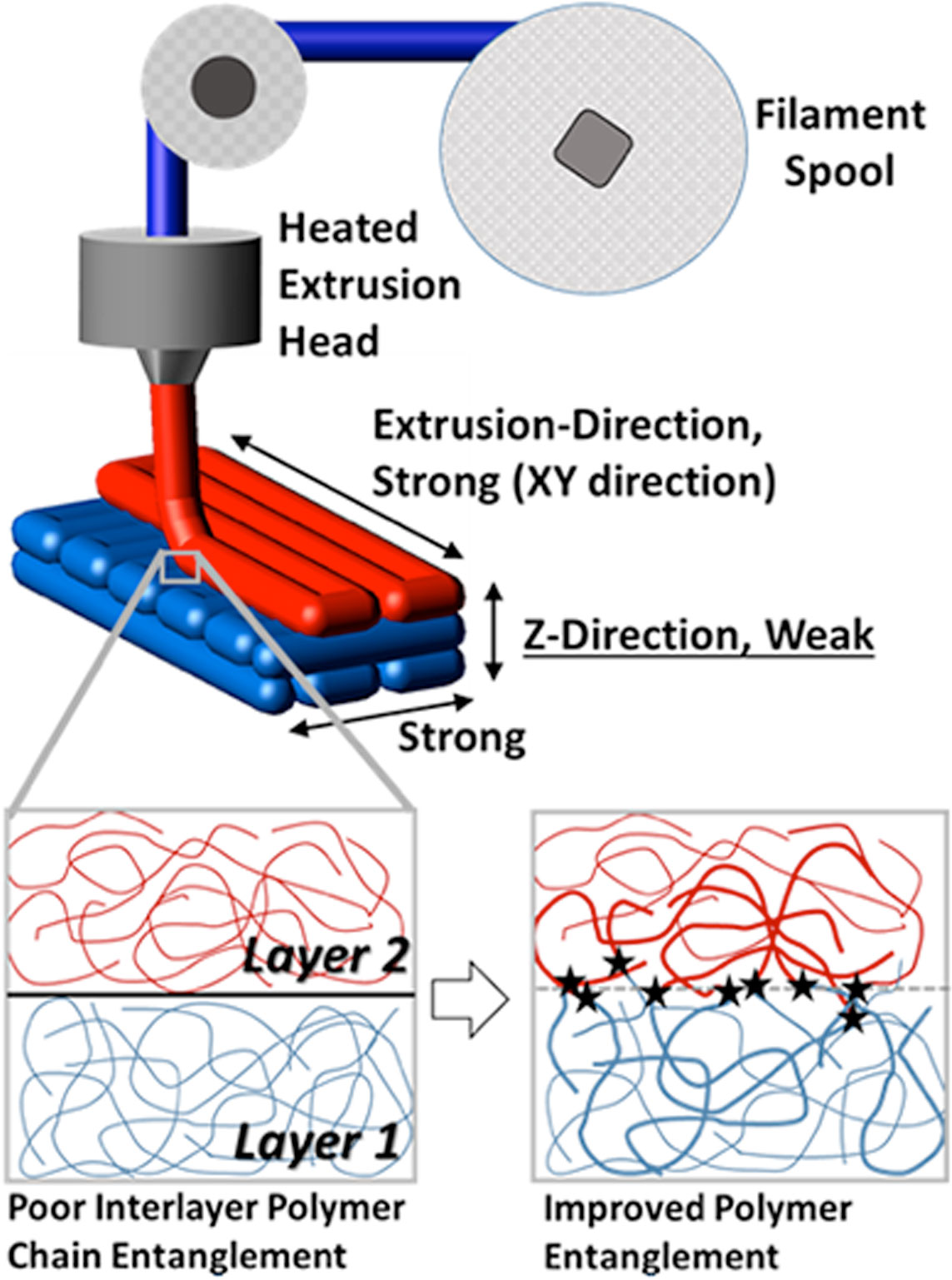 FDM is one of the older, more established forms of 3D printing, but because of its overall low cost, ease-of-use, and use of benign materials, it remains critical to missions across LLNL. For example, FDM is the ideal 3D printing technology for point-source manufacturing in remote locations, such as in the battle field or during space exploration. Nonetheless, FDM suffers from build anisotropies. While the results of this short-term feasibility project could not reach its stated objective of remedying build anisotropy through sulfate-exchange chemistry, printing of a novel class of thermoplastic was demonstrated for the first time at LLNL. Moreover, this project brought FDM filament manufacturing and recycling capabilities to LLNL. Overall, this study supported the NNSA goal of advancing the science, technology, and engineering competencies that are the foundation of its mission by enhancing LLNL's core competency in advanced materials and manufacturing.

We printed polysulfate thermoplastic for the first time. There may be applications where a hydrolytically stable form of polycarbonate is needed, such as for electro-chemical reactor housing. The xy versus xz mechanical properties of precipitated polysulfate are in line with similar FDM materials. Various attempts were made to introduce BEMP catalyst (an efficient catalyst for epoxides) to polysulfate to enable sulfate exchange during the printing process, but the results were inconclusive. Several questions remain, beginning with the efficiency of the exchange reaction. With small molecules, sulfate exchange is easy to observe, whereas more complex polymeric systems are difficult to probe. A thorough investigation of the sulfate exchange mechanism on small molecules would lead to a better understanding of important parameters, such as reaction kinetics and catalyst efficacy. Moreover, being a catalyst-driven process, it is unclear if the catalyst is active or even present at the moment of FDM.